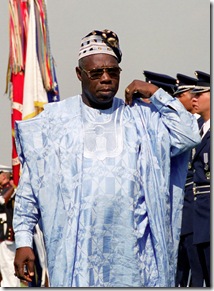 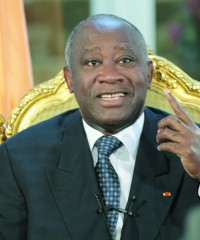 ABIDJAN, Ivory Coast (AP) - Former Nigerian President Olusegun Obasanjo made an unannounced visit to Ivory Coast, arriving late Saturday for a private meeting with the country's defiant president in a final effort to get him to cede power after losing the recent election.

An Associated Press reporter was present when the Nigerian leader arrived at the luxury Pullman Hotel surrounded by bodyguards. He declined to comment and was whisked away to his suite on the hotel's 9th floor, where he spent around an hour before re-emerging to head to the presidential palace.

Incumbent president Laurent Gbagbo has remained in office, insisting that he won - a victory handed to him by the head of the constitutional council, a member of his inner circle, who canceled votes from his opponent's strongholds.

The spokesman for Alassanne Ouattara, who is considered to be the legitimate president-elect after results issued by the electoral commission, said that Obasanjo came to meet with Ouattara immediately after leaving the palace.

Ali Coulibaly, the spokesman, said that Obasanjo will see both leaders a second time on Sunday.

The international community has been unanimous in recognizing Ouattara as the winner of the election because the results issued by the electoral body were certified by the United Nations in accordance with a 2005 peace deal. The U.N. sent over 900 observers who fanned out across the country to watch as the votes were cast and who later reviewed results poll station-by-poll station.

COTE D'IVOIRE : SOME IDEAS FOR THE PATH FORWARD

- Stop the unnecessary warmongering: War, whether civil or with international forces will not be in the interest of Ivoirians and their country. All parties must thus tone down the agitation for violent confrontation.

- Devise a deliberate diplomatic and mediated strategy: ECOWAS must lead efforts by crafting a non-military strategy that utilises the vast array of diplomatic and economic tools for persuasion, negotiating and compelling Gbagbo step down. Such a strategy must also utilise the experience and influence of some influential former presidents from the region - including Jerry Rawlings, Obasanjo and John Kufuor. Ghana's John Kufuor showed great leadership as chairman of the African Union during a similar impasse in Kenya.

- Quatarra and his 'government' must show leadership and statesmanship, by discouraging any hasty military invasion of their country. It was unfortunate for his appointed Ambassador to the UN, Youssoufou Bamba, to allege genocide in Cote d'Ivoire - a clear insinuation for military intervention. An international invasion, may eventually defeat the headstrong Gbagbo and get them their desire to be installed as a new government, but will have irreparable long term consequences for their people. In addition, they should also be held to the same standards as Gbagbo's men - with regards to respect for human rights and responsible conduct. He must forcefully discourage the incitement and acts of vandalism from his loyalists - including the armed rebels that are fighting on his side.

- Just as the citizens are increasingly implored to desist from using violence to express or resolve electoral grievances, I believe leaders of the region should demonstrate that same level of restraint.

- Prioritise Ivorian lives above all else and be conscious of the implications of each of the options you consider on the safety and wellbeing of the people.

Not that democracy and elections are less important, but that the lives citizens must be paramount - as all that are bound to be meaningless in war. And not that anyone desires for Gbagbo to get away with his irresponsible and selfish misconduct, but the circumstances may demand some uncomfortable compromises, not because of Gbagbo, but for the many vulnerable families who may unfairly be the victims of doing otherwise. Oftentimes, there is no perfect choice in a messy crisis - but we can always choose the lesser of two evils. And in this case, we may have to explore some difficult approaches, but around the principles of respecting of the will of the people as expressed in the run-off elections and ultimately their lives and safety.

For the sake of sparing Ivorians another costly human tragedy, our leaders must pursue solutions that will not compel Ivorian citizens to have to choose between democracy and their fundamental rights to life and safety. That we can, even in our most difficult times, find solutions- that work, without resorting to violence. That political misfits like Gbagbo will no longer be tolerated in African leadership.

Mawuli Dake is the CEO of Africa Group Consult, a premium consultancy firm committed to providing fresh strategic solutions to Africa's challenges. He was a member of the four member ECOWAS Vision 2020 team, constituted by the president of ECOWAS in 2008 to develop the current vision of the sub-region. (Mawuli Dake, in Allafrica [http://allafrica.com/stories/201101070522.html]