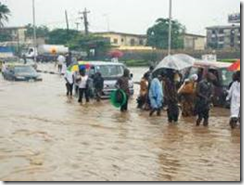 To contain expected flooding during the current rainy season, Ogun State Governor Ibikunle Amosun has set up a task force to devise measures on how to combat the impending threat.

The task force consists of permanent secretaries in charge of the Ministries of Works, Environment, Water Resources and the Bureau of Urban and Physical Planning (BUPP), as well as their senior officers.

The task force members yesterday met with the governor, Secretary to the State Government and Head of Service, to design the best approach to contain the expected flood and ensure that there is no repeat of last year’s disaster in the state.

It would be recalled that flood wreaked havoc in Lagos and Ogun states due to heavy rains, which led to the overflow of Ogun-Osun Rivers and destroyed property worth millions of naira in the two states….