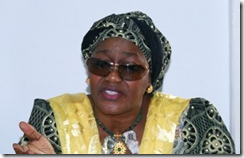 IN a surprise move last night at 8pm, the Economic and Financial Crimes Commission (EFCC) arrested the former Speaker of the Federal House of Representatives, Mr. Dimeji Bankole. A statement by EFCC’s spokesman, Mr Femi Babafemi noted that the commission had to arrest Bankole ahead of the Monday (today) date he gave to surrender himself, because of its intelligence report, which indicated that Bankole was allegedly plotting to escape.
Bankole, according to the statement, was picked up at his Asokoro residence in Abuja, the Federal Capital Territory.
The commission’s sources revealed that there was a stand-off as Bankole resisted arrest for about four hours from 4pm Sunday evening before he was eventually picked up.
“We eventually got the Inspector General of Police (IGP) and the Director General of the State Security Service (SSS) to withdraw their men from him. Then we were able to arrest him,” a top EFCC official affirmed. He arrived at the commission’s office in a Toyota Corolla car with aFederal Capital Territory registration number BJ 167 KWL, wearing a black T-shirt and grey trousers….