BONSAASO, 1 December 2009 (IRIN) - Cell phones have cut dramatically the number of women dying during childbirth in Amensie village in south-central Ghana, according to local health officials.
Health and aid workers say while other improvements in primary healthcare in Amensie - as part of the Millennium Villages project - have contributed to the drop, the availability of cell phones has been pivotal.
“When we did not have mobile telecommunication, women were dying,” district nurse Madam Lydia Owusu told IRIN. “It was horrifying to be pregnant here before this project came along…Mothers used to bleed to death while waiting in their homes, hoping a health worker would come to help them.”
“We have not recorded a single maternal death in Amensie village since 2006 when this project started,” she said.
Before cell phone and internet technology were introduced to Amensie, some 20 women died in childbirth each year, according to Owusu. In 2008 none did.
On average 560 women die during childbirth or from pregnancy complications per 100,000 live births in Ghana, according to the UN.
Amensie resident Juliet Asante, 35, cradled her two-week-old son as she told IRIN: “My first child died during delivery. It was painful because I now know she had to die so that I can live.”
Asante’s mother supervised the delivery of the first child at home because the family could not reach the ambulance or the district’s only midwife, Asante said. 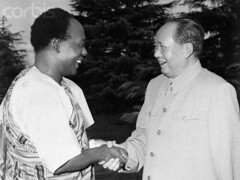 Ghana, China Celebrate 50 Years Of Diplomatic Relations
Date: 05-Jul-2010
Monday, July 5, marked exactly 50 years when Ghana and China established diplomatic relations.
A statement issued by the Ministry of Foreign Affairs and Regional Integration said in furtherance of their commitment to strengthening and deepening relations, the two countries released congratulatory messages for and on behalf of their Presidents and Foreign Ministers simultaneously in each other's capital