News From The States : Obama Met With Clinton

Discussion on a Possible Role

Washington— President-elect Barack Obama met late Thursday in Chicago with Senator Hillary Rodham Clinton to discuss what role she might play in his administration, advisers to both Democrats said on Friday. 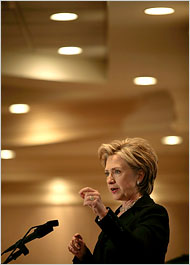 Neither side disclosed details of the conversation, and it was unclear how seriously Mr. Obama was considering bringing Mrs. Clinton, his onetime rival for the Democratic presidential nomination, into his cabinet.

Speculation in recent days has focused on the possibility that Mr. Obama would ask Mrs. Clinton, a second term senator from New York, to be his secretary of state. Others mentioned for that post include Senator John Kerry, Democrat from Massachusetts and the party’s presidential nominee in 2004, and former Senate Majority Leader Tom Daschle.