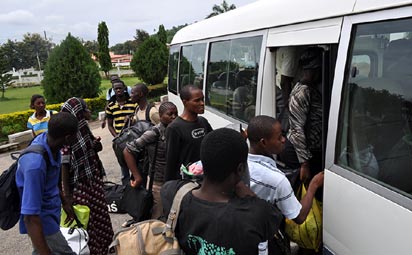 Some of the 43 Ekiti State students evacuated from Maiduguri, departing the Government House, Ado Ekiti, to their respective homes, Friday.

AS non-indigenes continue to leave Borno State following the spate of attacks unleashed on the state by the Boko Haram fundamentalist sect, many indigenes of Ekiti, Edo and Akwa Ibom states who fled the embattled state have arrived home.

The Ekiti evacuees, who are students of tertiary institutions in Borno State, arrived the Government House, Ado-Ekiti at about 3.30 a.m. in three buses.

The students, who narrated their ordeal to reporters, hailed Governor Kayode Fayemi for coming to their rescue by sending  buses  to convey them from Maiduguri.

Officials of the Government House were on hand to attend to the needs of the evacuees.