In Sierra Leone, New Hope for Children and Pregnant Women 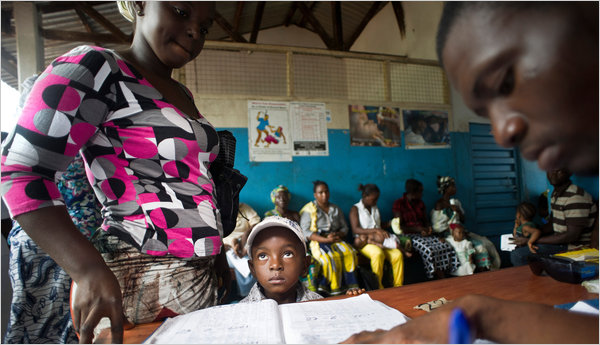 Clinics like this one in Tumbu have been jammed since Sierra Leone ended some fees in 2010. More Photos »

WATERLOO, Sierra Leone — The paramedic’s eyes were bloodshot, his features drawn. Pregnant women jammed into the darkened concrete bunker, just as they had yesterday and would tomorrow. The increase in patients had been fivefold, or tenfold. The exhausted paramedic had lost count in a blur of uninterrupted examinations and deliveries.

he word was out: it was no longer necessary to give birth at home and risk losing a baby or dying in childbirth. Hadiatou Kamara, 18, waited in the crowd. She had already lost a baby boy and girl. “They both died,” she said quietly.

Now, for her third pregnancy, she was at this rural health clinic outside Freetown, the capital. The Sierra Leone government has eliminated fees for pregnant women and children, and Ms. Kamara, like thousands of women in a country where surgery has been performed by the light of cellphones and flashlights, could afford trained medical staff to oversee her pregnancy for the first time. …