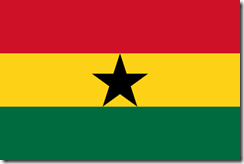 gona Abodom, (C/R), July 8, GNA - Ghana is to receive a 95 million dollar Agricultural equipment, including tractors and combine harvester’s from Brazil, to boost rice production and other Agricultural sectors.

The items would come under a soft loan from the Brazilian government to the Ghana.

Mr Louis Fernando Sierra, Brazilian Ambassador to Ghana, made this known, when the Chiefs and People of Agona Abodom in the Central Region conferred on him honorary Citizenship and Development Chief of the town at Abodom.

He hoped that the equipment would help in increasing food production in the country.

The Ambassador said through his instrumentality, a 40 million dollar sickle cell and blood centre has been constructed in Kumasi, in the Ashanti Region, to facilitate quality health delivery services for the people in the region.

Mr Sierra said the Kumasi centre would be linked up with the Agona Abodom clinic to provide health service delivery to the people in the area.

The Ambassador expressed appreciation to the chiefs and people of Abodom for the honour done him and declared that he “would never forget it in his life”.

He said he was not surprised, because Brazil has a long standing relationship with Ghana and expressed the hope that it would grow from strength to strength, to promote bilateral and economic cooperation between the two countries.

Nana Kojo Asomaning, Tufuhene of Abodom performed the necessary traditional rites and conferred the title on the Ambassador, who was given a stool name of Nana Kweku Sierra I and later made him a member of the Asona family.