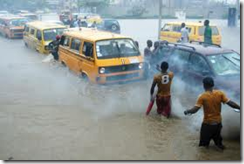 A spokesman for the National Emergency Management Agency said Tuesday that at least 20 people died in the commercial capital of Lagos during unusually heavy rains Sunday.

He said the floods displaced more than 100 people in Katsina. Lagos shut down its public schools Monday.

The agency has warned that rains will be heavier this year than last year. Last year’s rains displaced about 500,000 people nationwide