« How My Only Sister Was Slaughtered In The Post-Election Violence , By A Victim | Accueil | Gbaramatu: A King without Palace » 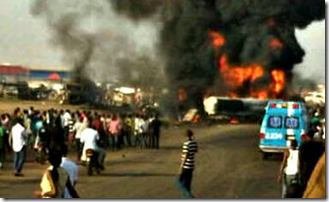 By Evelyn Usman, Olasunkanmi Akoni & Monsur Olowoopejo
An explosion Wednesday,rocked Kara and Ibafo areas along the Lagos/Ibadan expressway, resulting in an inferno which left two persons dead and several others injured. About sixteen vehicles were also reportedly destroyed, with eight completely burnt.

The incident which resulted in an unprecedented gridlock on the major expressway, occurred after three tankers conveying substance suspected to be acid, petrol and gas collided.

Eye witnesses said one of the tankers, conveying substance suspected to be petrol, apparently had a break failure and in the process, ran into another 33,000 litre tanker conveying some acidic substance. Time was 12.30am.

However, while effort was on to clear the vehicles, another truck with registration number XK 583 KJA fully loaded with  diesel, reportedly ran into the stationary trucks at about 6.30am, resulting in an inferno.

Another two tankers parked close to the scene which is few kilometers away from the Mountain of Fire, Prayer City, Ogun State, also went up in flames.

Motorists plying the route hurriedly made u-turn to avoid being entangled in the resultant inferno. In the process, some commuters reportedly sustained varying degrees of injuries in their bid to escape from the scene. Some of them said to have been chocked by thick smoke emanating from the flame, were rushed to the hospital, while others abandoned their vehicles as they fled for safety.