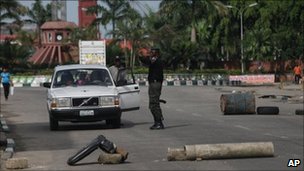 Counting is underway after the final round of Nigeria's lengthy election process, which was marred by the deaths of an estimated 500 people.

Elections for Nigeria's 36 powerful governors were delayed in two of the states hit by the worst violence.

More bombs exploded in the north-eastern city of Maiduguri. No-one was hurt in the city, where at least three people have been killed since Sunday.

The governorship elections have been relatively peaceful with low turnout.

Counting began in public at polling stations around the country after voting officially ended at 1600 local time (1500 GMT).

'Bomb in a pothole'

Governors enjoy wide powers in Nigeria and some, especially in oil-producing areas, control bigger budgets than those of national governments in some neighbouring West African countries.

Turnout also appears low in the biggest city, Lagos, possibly because of voter fatigue in what is now a fourth week of elections, the BBC's Tomi Oladipo reports.

In Rivers State, in the volatile oil-producing Niger Delta, the BBC's Fidelis Mbah says the election was largely peaceful, contrary to expectations.

However, there are some unconfirmed reports of intimidation elsewhere in the Niger Delta…