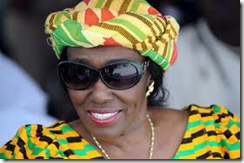 Nana Konadu Rawlings, 62, in a letter to the National Democratic Congress' secretary-general Thursday, says she is resigning as first vice-chairman so she can contest President John Atta Mills in July presidential nominations for next year's general election.

This is the first time a sitting president has been challenged by a member of the ruling party. If chosen, Konadu would also become the first woman to stand for presidential elections.