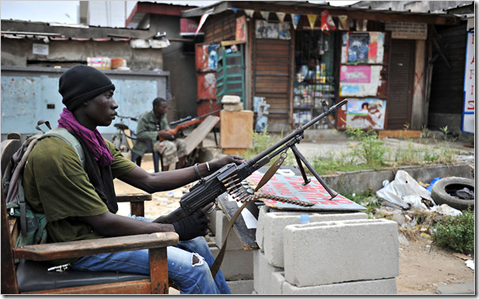 PARIS — As the wily Ivory Coast strongman Laurent Gbagbo remained cornered in the basement of the presidential residence in Abidjan on Saturday, his forces retook the offensive in a series of military actions, belying recent predictions of his imminent downfall.

Since Friday, forces loyal to Mr. Gbagbo have recaptured territory in Abidjan, the economic capital, repelled a French military operation, attacked his rival’s headquarters and recaptured state television and radio, which resumed broadcasting messages of defiance.

Mr. Gbagbo was still surrounded by forces loyal to his rival, Alassane Ouattara, the country’s internationally recognized president, which were backed by troops from France and the United Nations.

But on Saturday evening, his forces attacked the Golf Hôtel, where Mr. Ouattara has maintained his headquarters since winning the presidential election in November. A United Nations official said it was the first time Mr. Gbagbo’s forces had attacked the hotel.

The hotel came under fire from small arms and mortars, witnesses said, while hotel employees, guests and Mr. Ouattara’s government took cover in the basement.

“Gbagbo’s mercenaries lost men,” said a hotel employee reached by telephone, who declined to give his name, fearing for his safety.

A spokesman for the United Nations mission in Ivory Coast, Amadoun Touré, however, said no ground forces were involved in the raid, and that United Nations forces had returned artillery fire.

The state-run RTI television and radio station, which Mr. Ouattara’s troops had captured 10 days earlier, came back on the air on Friday, returning to its role as a mouthpiece for the Gbagbo government.

“The regime of President Laurent Gbagbo is still in place,” read another statement, scrawling across the bottom of the screen. “We ask for the strong mobilization of all Ivorians.”

Late Friday night, his forces thwarted a French military rescue operation. Responding to a request for aid from another country, which French officials did not identify, French helicopters had mounted an effort to rescue foreign personnel from a diplomatic residence in the Cocody neighborhood, not far from Mr. Gbagbo’s residence.

But the aircraft encountered a heavier presence of Gbagbo loyalists than anticipated, taking fire from small arms and at least one armored vehicle, which the French military said its forces destroyed; the rescue operation was aborted.