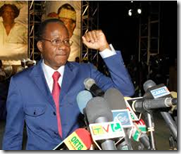 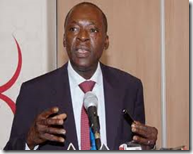 COTONOU, March 26, 2011 (AFP) – The main challengers in Benin’s disputed presidential vote have filed appeals over results showing incumbent Boni Yayi won with 53 percent, the constitutional court said Saturday. Tension has risen in the small west African country since the vote, with police firing tear gas to disperse opposition protesters in the economic capital Cotonou on Thursday. ”We have received a total of eight appeals, including three from citizens and five from candidates who competed in the presidential elections,” Sylvain Nouwatin, secretary general of the constitutional court, told AFP. The deadline to file appeals expired late Friday. The five candidates to appeal include Yayi — arguing that his victory margin was greater — as well as his main challenger Adrien Houngbedji, who has dismissed the results showing he had 36 percent and claimed victory for himself.

Abdoulaye Bio Tchane, who had been seen as a third major candidate but finished far behind with six percent, also filed an appeal. Both Houngbedji and Bio Tchane allege that Yayi benefited from illegal voting stations. They have already alleged fraud in the March 13 ballot, which had previously been postponed twice because preparations were not complete. ”More than 140,000 votes were credited to candidate Boni Yayi through these fraudulent practices,” Houngbedji told AFP on Saturday of the alleged illegal voting stations. Bio Tchane’s campaign has made similar allegations in its appeal, his spokesman Raymond Dossa said. He cited dozens of alleged examples from the country’s north, where Yayi is from. The court now has 10 days to rule on the appeals. A new president is due to be sworn in on April 6. UN chief Ban Ki-moon’s special representative for west Africa, Said Djinnit, expressed concern over the post-electoral situation on Friday….