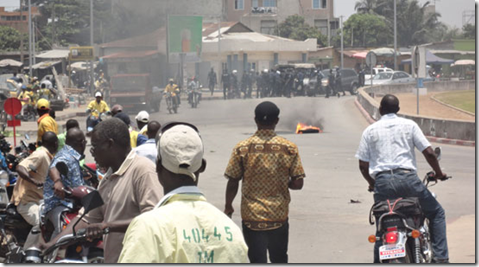 Cotonou - Benin authorities on Thursday fired teargas to disperse youths protesting against the re-election of President Boni Yayi in recent polls after they refused to clear roadways, police said.

“We could not accept that their presence in the roads obstruct others' freedom,” national police chief Anki Dosso Maiga told reporters.

“After having asked them in vain to leave the area, we fired teargas to disperse them.”

Several hundred youths gathered at two locations in the economic capital Cotonou in support of opposition candidate Adrien Houngbedji, who has claimed he won the March 13 election and alleged fraud in the ballot.

Tyres were burnt in the roadway and protesters held signs labelling Yayi a “thief”. Teargas was fired at both locations, police said.

Benin's constitutional court announced early on Monday that it had approved results showing Yayi had won the vote in the first round with 53 percent, compared to Houngbedji's 36 percent.

Houngbedji immediately rejected the results, claimed victory for himself and alleged widespread fraud in the ballot.

Candidates were given five days to file appeals with the court over the results. Sylvain Nouwatin, the court's secretary-general, said Thursday that four appeals had been filed, though not in the name of any of the candidates.

Voting day passed calmly despite chaotic preparations that had caused two earlier postponements of the ballot.

The first-time use of an electronic voter register had led to opposition allegations that more than a million people had been left off it - a figure others said was exaggerated.

A mop-up voter registration was to be held on Wednesday and Thursday before the election, but was extended into Saturday when crowds mobbed sign-up centres and equipment broke down.

Other issues had also led to the two earlier poll delays, including failure to distribute electoral cards on time and designate and train polling station agents.

A string of protests involving several hundred people took place over the electoral roll controversy in the run-up to the vote, and authorities fired teargas to break up another demonstration last month.

Houngbedji, 69, and running in his fifth presidential election, had pushed for a third postponement of the ballot, arguing that voter registration should continue.

Yayi, a 58-year-old economist, was seen as a symbol of change when he took office in 2006 in the country, which is dependent on cotton cultivation and its port, but has since been weighed down by corruption scandals.

Houngbedji was supported by many of the country's traditional political elites.