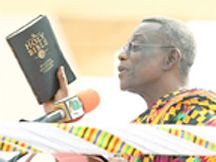 Ghana president says not taking sides in Ivory Coast crisis .
Friday, 07 January 2011 17:46
ACCRA- Ghana President John Atta Mills said Friday his country was not taking sides in Ivory Coast's crisis and opposed the use of force in the neighbouring country to remove strongman Laurent Gbagbo.
"Ghana is not taking sides in the crisis in Ivory Coast nor exporting arms to Ivory Coast as being alleged by a cross-section of the international media, but will support any government in Ivory Coast," he told reporters.
He also said he had "been in touch with the two personalities involved to find ways to solving the problem peacefully. Some of us believe in diplomacy in solving problems rather than military intervention."
West African bloc ECOWAS has demanded Gbagbo step down following disputed November elections in favour of his internationally recognised rival Alassane Ouattara and threatened the use of force if he does not. Ghana is a member of the 15-member Economic Community of West African States (ECOWAS)….