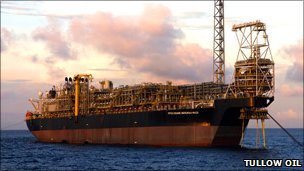 The West African nation of Ghana has begun to pump its first commercial oil after the discovery of the offshore Jubilee Field three years ago.

President John Atta Mills turned on the valve at an offshore platform.

A consortium led by UK-based Tullow Oil hopes to produce 55,000 barrels per day, increasing to 120,000 barrels in six months.

Wearing safety gear and blue overalls, the president opened the valve in a televised ceremony some 60km (40 miles) off the coast from the town of Takoradi, Reuters news agency reports.

The discovery of oil off Ghana's coast has raised questions about whether Ghana can escape the "resource curse", where discoveries of valuable commodities fuel conflict and corruption instead of funding development..