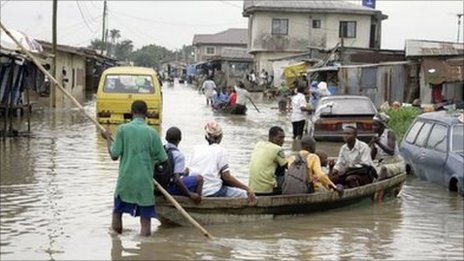 severe flooding for 47 years - when the rising waters were blamed on the traditional voodoo deities that many people in this small West African nation still worship.

Some 680,000 people have been affected by the floods - and more than a quarter of the country has been under water since mid-September.

"I have never seen a thing like this in my life," says school teacher Amedokpo Luis, who has taken refugee with his family in a small room in a colleague's house.

His house was flooded in October as tidal and river waters slowly covered Benin's largest city of Cotonou, where more than two-thirds of the population live.

"I have heard of the story about 1963 when the gods of the river were said to be angry," he says.

"It is said that voodoo priests around the country jointly offered sacrifices and the flood vanished."

But most residents of the flooded city feel this year's inundations have less to do with angry gods and more to do with a phenomenon that is affecting much of West Africa this year.

"It is true that the flood has taken a huge toll on human and livestock casualties - apart from displacing great number of residents, but I do not believe that the gods are to blame," says Dr Adeyinka Adebayo.

He has been helping with Cotonou's cholera outbreak, which has so far killed 60 people - although the official records only reflect those who died in hospitals.

"I would rather say that it is a result of global warming which we have been hearing about for some time."

Dr Adebayo's home, which also serves as his clinic, has been submerged by the flood waters.

He regularly canoes down to his flooded compound in case patients are looking for him.

"As you can see, my house is now under water. I have evacuated all members of my family and all my medical equipment is stored away in a friend's house.

"I now come to hang around here to take my regular clients to a makeshift clinic upland."

He says the continual rainfall in October saw the flood waters rise gradually until the whole of Avotrou in the Akpakpa area in the centre of the city - about three kilometres (nearly two miles) from the coast - was under water.

"An incident particularly touched every resident of this quarter," he says.

"One woman's two sons drowned after she had sent them to cross the water while she waited, as the boat could not take all of them at one trip," he says.

The boat overturned and she was not able to rescue them.

This week, the government appealed again for aid, saying it needed $46m (£28.5m) as thousands of homes have been demolished, more than 80,000 head of livestock have been lost and many crops have been ruined.

The UN refugee agency's Angele Dikongue-Atangana says so far about 20,000 tents have been distributed to the estimated 200,000 people who have been displaced - and more tents are being sent out daily. 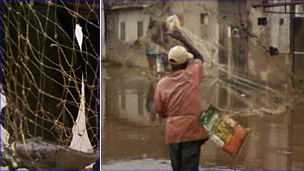 An outbreak of cholera in some parts of Cotonou is also a concern.

"Cholera is inevitable in the sense that there is no effective drainage system on this part of the city," says Dr Adebayo about flood waters which have been polluted by sewage and rubbish from the gutter.

"The major road has just been slabbed [tarred]. Most houses here still use the pit latrine and fetch water from wells dug right inside the compounds," he says.

"Now the waters that are reaching up to an average man's chest have mixed with and blended with both the latrine and the pit water.

"I have personally treated a few cholera cases on humanitarian grounds before referring them to public medical centres."

The fishermen of Cotonou are making the most of the wet situation - abandoning their trips out to sea in order to ferry people in their canoes.

The new taxi services appear to be yielding greater incomes for them.

And some fishermen have even been seen casting their nets in the streets, and successfully catching fish.

But the frustration many residents feel about the slow response of the government and the delivery of aid was expressed by one displaced motorcycle mechanic….