Is the Beninese Press affected by the Syndrome of the violated Woman?

Or is it in the invisible hand of the same Owner? 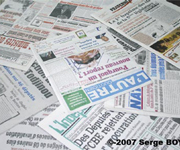 Last week Reporter without Borders published its world index in which our country, Republic of Benin, shows a tremendous drop.

Let us recall that Reporter without Borders (RSF in Fr) is an organization dedicated to the defence of the freedom of Press, and the right of journalists to do their job in safety. Its world index is a measure of the freedom of Press in the world. It was being published the last 10 years. As time went on, this world index presented some permanent features as well as some singularities. So, if the Northern countries of Europe are credited without defect for the respect of freedom of press, the G8 ones, albeit democratic, do not shine with their presence among the top 20 members of the index. This shows that the imperatives of the geopolitical greatness, in the shade of the democratic culture, do not often marry with the strict respect for the freedom of press. Besides, if Africa which is exposed (explained) to ceaseless wars and to recurring political violence sees most of her countries flooded in the classification – this year a country of the continent, Eritrea, is the bottom of the index as the 169th and last country – still the fact remains that some African countries showed that one can be African and yet pays due respect to freedom of press and democratic rules. As a matter of fact, although Africa gathers many factors and conditions determining the violation of freedom of press (autocratic and corrupted regimes, wars, putsches, poverty, etc...) some African countries bear up the flag of respect of political freedom and especially the freedom of the press. And so our country, Benin, having occupied formerly despicable positions, thanks to the climate of appeasement created by the democratic Revival, raised itself in the top of the index and was dedicated, in 2006, 23rd country for the respect for the freedom of the press, in front of many big democratic nations like France, the United States, etc....

But, in 2007, instead of progressing towards the top 20 countries, crash, our country slips, and dives of 30 points into the depths of the classification to meet itself in the 53 rd position! Goodness, what happened in the lapse of one year? Are we cursed by the gods of the freedom of Press? In fact, the reason is that meanwhile the power changed hands thanks to the elections of 2006. Within a few months of Yayi Boni’s presidency, journalists went into trouble with the power; if the clashes and frictions which inaugurated the tough relationship between the press and the new power could be written off, we all bear in mind the successive charges of journalist and their subsequent imprisonment for defamation or insulting the president. This was an unprecedented event during the 10 years long democratic rule of President Kérékou.

Those snags and tensions, and the unusual touchiness of the new political leaders against the independence of the press, or at least against its use by the journalists, did not remain unnoticed; national and international observers were moved. It is necessary to indicate that the Beninese power afterward strongly righted the issue. But the evil was made. Where from this spectacular dive of Benin in the RSF 2007 index

But freedom of the press is not measured only with direct threats on journalists. Other social and ethical factors enter into account. Anyway, the spectacular dive of Benin in the RSF 2007 index reveals two things: 1. It marks the unhappy consequences of the inaugural touchiness of the power against the exercise – yet not always commendable – of the freedom of the press by Beninese journalists; 2. It also indicates that armistice in the relationships between government and journalists in Benin may be fobbed off with empty promises of a cringing control on the press, only way for the government to square the circle of freedom.

This kind of situation is however worrisome, because it reminds the diverse forms of seizure of freedom that tyranny invents in order to persevere in its being. The risk indeed exists that the number of news papers or journalists to resist to the watchword “beat them or join them” may turn out to be very small.

As a matter of principle, in those conditions, the new position of our country in the 2007 RSF index must interest the press in Benin. Because it is the proof that a specialised institution is watching how things are going on in the field of freedom of press in our country, informing about them, and trying its best to reduce violation of freedom of press. Of course if and when our country is honoured with a good position in the RSF index, every one shares the honour: journalists, citizens, and government. But when the situation of freedom of press debases and this debasement is followed by a subsequent setback of our country in the RSF index what is the interest of the journalists in ignoring the event as thought it never happened? What is the point making it an absolute non-event?

As a matter of fact, in the Beninese press, unless of a mistake, no journalist or no news paper bothered to mention the publication of the 2007 RSF index. No single word was hinted about it. Yet, due to their non-observance of press deontology, journalists are sometimes responsible of snags and tensions between them and the government. But as far as the most important causes of threats on the freedom of press emanates from government, for what sake the journalist think it wise to overshadow an information like that one, which exposes the risks they encountered in doing their job ?

This silence of the Press which does not displease the power; silence of the shepherd when the passer-by shouts in the wolf, is really intriguing. At best, it betrays the fact that the press is ashamed to speak about the rape of its freedom, like those violated women who do not dare to speak about their troubles for fear of gossips; violated woman syndrome? In the worst this silence would sign the act of joining of the power by the press, and of course the rise of an era of trompe-l’oeil freedom.