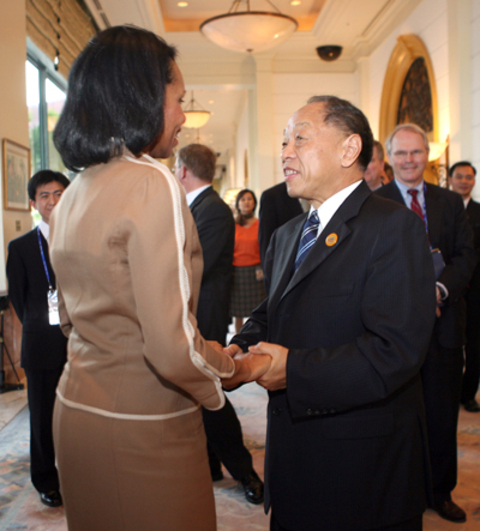 Li Zhaoxing the head of the Chinese diplomacy has practical experience. Whether  in Japan to ease the crisis of history textbook ; or in Korea to seal an alliance against the Japanese drunkenness of obscene remembrance of past, Li Zhaoxing always has brilliant smile and frank handshake. Warm sincerity will say some, diplomatic trick will answer others. Whatever it is, the warm nature of Li Zhaoxing does not know border: in America, in Asia or in Africa, the man gives the feeling to privilege a diplomacy of nearness where everything can be settled by frank handshake and taps in the back. Between big countries, this ardour is restrained by the subtleties of political codes and gentlemen agreement ; but in Africa, a continent par excellence where warmth is value, China knows how to play old Third-World homesickness, and the diplomatic willingness of Li Zhaoxing arouses conviction.

Such is the case during his visit in Benin last week. In the TV, watching the Minister, at the head of an alert delegation with smile, walking across places, approaching his hosts and shaking hands warmly makes one forget the so called obsequious reserve of Asians, their legendary spare instinct. Mrs Boni Aladji, the gazelle of the Beninese diplomacy was in the seventh heaven. The charming smile of the Beninese Minister, married to the energetic gentleness of the tiger of the Chinese diplomacy made germs of spark. Was it the beginning of a triad ? Many a sign provided the feeling.

For somebody as me who had not been to Benin for some time, the presence of the Chinese in our cities, especially in Cotonou, is quite obvious; it seems commonplace, economically and sociologically. And China, in the fire of its offensive on our continent, seems to make sheep's eyes at  Benin, her former ideological ally. But at the moment, business is first. Yesterday, it was Mao's red Book, today, places to contracts and figures. Among concrete fruits of this warm diplomacy, we can count : an agreement concerning the discount of  part of Benin debt to China, a 30 million yuan loan (2,9 million euro) and a grant for the development of the administration in Benin and construction of road infrastructures. Also, at the charge, Mr Zhaoxing, who was due in equatorial Africa and elsewhere on the continent, proceeded to the launching of the construction of a Chinese commercial center in Benin; a centre intended to welcome in Cotonou a permanent exhibition of China commercial offers.

Smiles, frank handshakes, and community of Third-World experience are quite good. But what worries me is what a friend of mine working in the Foreign Ministry told me. According to this well informed civil servant, agreements with the Chinese are interesting, but they are often accompanied by a long period of transfer of technology, not to mention ownership right. Some delays may be as long as a hundred years! A hundred years, may not be so long for China, an old nation having behind her a past of several millenniums. But for us Africans who have been languishing in the shadow of poverty an alienation, finding it hard to take hold of our destiny and get rid of  the fate, we look forward to making our own the Chinese proverb which says: " it is better to learn to fish rather than be given a fish " and I shall add gladly: " and not to be reduced to salivate while it is cooking in our own kitchen, in the Chinese sauce … "

I agree with Bill that Japan, South Korea, etc. are much more technologically advanced than China, but if Bill, you think that China has nothing to offer Africa as far as manufacturing, etc. goes, then you do not know China very well. I have spoken with many Africans who have come here (to China) to learn what they can from the Chinese. Most African businesses and entrepreneurs don't need advanced or cutting-edge technologies from Japan. They need basic technologies, like food processing , for example.
The point is not that China is the best partner. In fact, the more I see what the Chinese are doing to develop their own countries, the more terrifying my nightmares (about what would happen if China plays a major role in Africa's development) become.
But China has the scale, the money, and the (self) interest, in short, the ability to do what other countries either cannot or will not. But it's up to Africans to protect their own interests.

Blaise Aplogan wrote an excellent piece about the PRC's investment and business policies in Benin under the wise and wiley guidance of the PRC's Foreign Minister. Trés bon Blaise! Great follow up comments as well.
This argument about skills and technology transfer from China to Africa:
Does Africa really need a skills and technology transfer from China??? After all, there are literally 100's of thousands (or more) Africans with university and technical college educations and loads of African people with valuable work and management experience living and working in countries all across the globe. This is especially true for the African diaspora, 18 million+ of which live in Europe alone.
These highly qualified African people DO NOT NEED a technology and skills transfer from China! These people simply need a fair chance to show what they can really accomplish in their home countries when given transparent and sustainable support from foreign investors and businesspeople and yes, even foreign governments. Perhaps most important of all they need good governance and strong leadership from politicians and businesspeople in African countries where they want to work and live.
The PR of China has very little to offer in cutting-edge advanced modern technology and business management skills. The Asian powerhouses of Singapore, Taiwan, Japan, and Korea have much more to offer Africa in that department than China. If that is what African countries seek from their foreign business partners, then they are "barking up the wrong tree" in their present Win-Win courtship with the PRC

Africa must go fish in external waters.
Skills transfer issue arouses each time raw materials crisis specially oil are outlined. It was already the case during the oil crisis of the 70s. The question of increasing the income of raw material producing countries re-appears inevitably.
Right now, Africa finds itself in a crucial situation as the end of oil period is imminent while the continent has made no real progress on the way of building a consequent industrial plan which can generate more benefit in added value exchanges.
Thought people say that we are progressing towards post-industrial era, still the fact remains that both the growth and the power of China are founded on exportation of manufactured goods on global markets.
That is where you put the right question in your post: Africans lack of aggressiveness during negotiations, as no one gives out his skills freely or easily. One has to snatch it through long and tough negotiations in a win to win discussion
But It is necessary to have trump cards to hold win to win negotiations. And the African countries taken individually don’t have it the current state in front of their so called partners.
It seems to me that NEPAD is stillborn and AFRICAN UNION is being put forward as a possible way to enhance negotiation capability.
However, time is short. AU is still in diapers and the end of oil is close to us. I would even say that urgency exceeds technological challenge and should take into account the snatching of shares in investments on markets with fruitful economy.
« You guys, you need uranium of Niger? Well give us the same in the nuclear factory on your territory »
« You want a bit of Congolese oil? Give us so amount of share of some gas deposit on your own territory »
In short, Africa must get ready to go and fish outside her own territorial water.
Otherwise Africa will continue bleeding mercilessly, as it was the case in the past, for the good and prosperity of the other continents. So it is urgent that African Union
It is thus urgent that African Union really equip herself with means at the level of her ambitions. This is the only condition for of a real freedom of operation on the international chessboard. So far, this is not yet the case.

Jennifer Brea comes back on the subject of skills transfer by Chinese to Africans, and, to my opinion speaks thoroughtly her mind on the topic. The points she raised and the arguments she puts forward are relevant. Most of them deserve comment, on which I will certainly soon come back in french, because as the saying goes, " La guerre est une chose trop sérieuse pour être laissée aux seuls généraux ! "
But Meanwhile, "en anglais dans le texte..."
http://jenbrea.typepad.com/africabeat/2007/01/blaise_i_loved_.html#more

Blaise, I loved this post. You're an evocative writer in any language.

I agree that technology and skills transfer are key, but that doesn't happen by accident or simply through passive osmosis. My guess is that real skills transfer isn't going to come unless a) African governments *really* hammer this point home as a condition for future business deals (I'm a bit skeptical on this point for the simple fact that human beings have a difficult time acting rationally in the face of mountains of cash) or b) when Africans actually start owning a significant share of Chinese-funded projects.